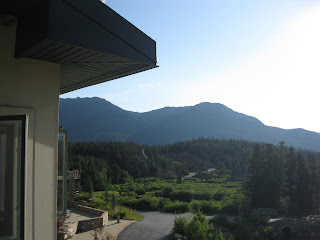 We began our journey on a Saturday and had four or five days to actually arrive at our location in Northern Colorado. We spent Saturday evening with Vincente and Sharon Ambrossetti in Nashville Tennessee. They are wonderful supporters of our ministry and we spent hours and fellowship with them.

It was late, but we headed up to Clarksville Tennessee and camped in a rest stop and with the truckers and the tired. We arose early and made it to our alma mater, St. Louis University. This is where we met in 1971 at a coffeehouse Cricket was opening on the campus mass was celebrated by Jesuit father john Kavanaugh, one of the famous St. Louis Jesuit musicians responsible for so many of the hymns now sung all over the world. We got to visit with Father Kavanaugh and I attempted to remind him that he and I had both played in Cricket’s coffeehouse a few hundred years ago. He teaches philosophy in the college and grad school, and I later discovered has written a book on the topic of being Catholic in a consumerist culture, which was exactly the theme we were using for the Franciscan regional conference we were leading. After mass we wandered the campus which has grown so much since we were here and found the place where the coffeehouse had been. 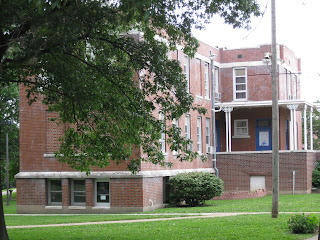 Later, we traced our roots to the Saint Louis Christian home, which was an orphanage/Foster Care center where we worked and lived so that Jerry could finish his undergraduate degree. Jerry worked days and went to school at night and even did the converse as well. For a time, after our son Jacob was born, we lived in a large storage closet in the residential center. This center still functions for the city of St. Louis as a refuge for victims of abuse.
Although Cricket grew up in north St Louis, our relatives were not in town that day so we headed for Leavenworth Kansas. Along the way we visited a beautiful state park and hiked along its rocky ridges 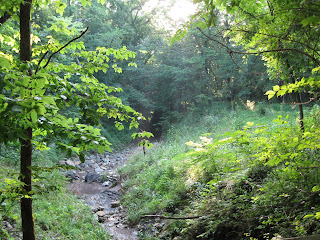 (blue springs, mo). We arrived that evening to spend a couple of days when our good friends the Anderson’s in Leavenworth. Paul took us to see a church that is in the Guinness book of world records, because it has one floor for Protestant services and another for Catholic services; I believe it is the only church holding simultaneous Catholic and Protestant services in the same building. They were wonderful hosts, and while Iran and did research and prepared music, Cricket did her final preparations for the retreat we were giving.

On Tuesday we headed across the great state of Kansas with the intention to stop at the beautiful “cathedral of the plains”, St, Fidelis church. 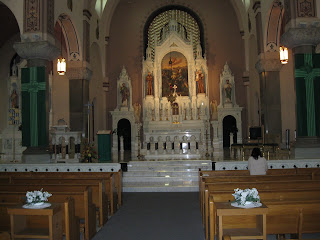 It is a beautiful and remarkable Capuchin parish that you can actually see from the interstate. We spent the wonderful time there and then headed to a remote state park for the evening. Although it is called Cedar Bluff, I call it “walking stick” park because the road was covered with those finely created insects. 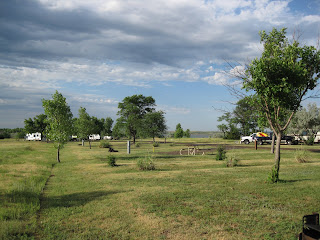 The late night held a typical Kansas thunderstorm which cooled the air. For this entire trip, we never hurried. We left early enough and spaced things well enough that we could start, stop, and side trip whenever we desired. We were surprised as we drove across the plains to see a few big Catholic churches in very small farmer towns. I know something of why this is, as my home state of Indiana is similar in its history.


As it was a Franciscan feast day, and we wound up having to drive all the way to Denver to find a weekday mass we could attend. This was at Our lady of Loretto which is a beautiful and vibrant parish even in the middle of the week! 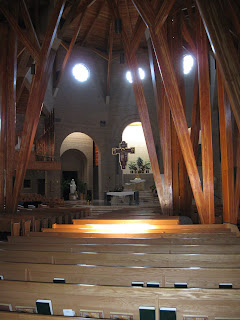 We so enjoyed the evening mass that we camped nearby in a state park (within the city limits of Denver) and attended mass the next morning.

That afternoon, after visiting the Colorado State university nature center, we spent the next two days with Cricket’s college roommate Mary and Dennis Sovik. I remember joking with Denny in college about how impractical people thought my theology degree would be, and even moreso his degree in geography. But Denny and Mary have lived a very full life and raised a family, traveled, volunteered, and served as a wonderful inspiration. Denny has always had a successful construction team business with solar and ecological emphasis. 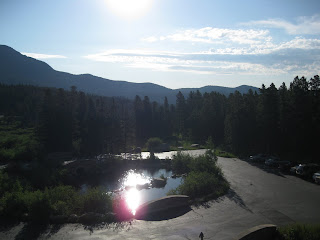 We arrived at Saint Malo on Friday afternoon and began our retreat. The first evening concentrated on “seeking in the desert”. Jerry had felt lead to write a song based on psalm 34, “there is one thing I seek,” and while he was writing it a small bird landed on the window and began singing nonstop. Jerry practiced other songs and the bird wasn’t there, but returned whenever the “one thing” song was played. Jerry couldn’t believe that the participants would believe this happened, so he had Cricket verify it. It was a wonderful evening with Cricket’s anointed teaching and a social time afterwards. 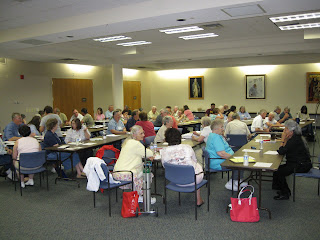 Saturday began with mass and Friar Felix brought us together. We had three presentation times which included “Becoming Prayer”. Both Cricket and Jerry’s presentations were interactive with the group, but there was plenty of time for socializing and reflection as well. The meals were not rushed, and on Saturday night we found they had a tradition of a sing along in the lodge; I’m not sure how often Glory and praise, Motown, rocky mountain high, and southern spirituals get mixed in the same venue but we all laughed and sang until we collapsed. Sunday morning was the final presentation and then the celebration of the mass it was a very special time up blessing, and so many of the 60 participants wanted to maximize the time we all had together. As we were leaving, Cricket happened to ask in which room Pope John Paul the second had occupied when he was here---and sure enough, Marianne and the team had given us that room. 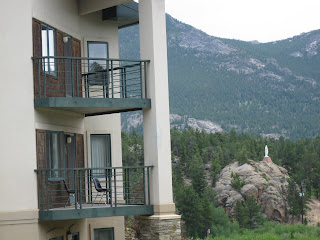 Heading back across Kansas, we provided an evening of Franciscan reflection for a group of 3rd Order Carmelites in KC! They welcomed us wonderfully and we were blessed to pray into the late night with them! 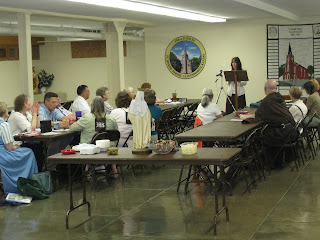 We drove back across the plains and somehow got lost trying to get back to walking stick park. Cricket guided us to a road that I believe still had the wagon Ruts of the Pioneers’. But we had a wonderful late night and morning “Rough camping” (without hookups) and Cricket prepared the retreat she would give in Kansas City for a group of third order Carmelites. We knew this would be a small group, but as always, the right people were there and we went well into the night in prayer and celebration. Cricket stayed with her good friend Maria in Kansas City but Jerry headed down to Little Rock to give a workshop. There is something so renewing about driving on the smaller highways our grandparents had as Jerry headed through the southern half of Missouri to Arkansas. On Friday, we had a rendezvous and headed to see our daughter Talia in a major role in the Baton Rouge little theatre’s production of The King and I. (Talia can be heard, as can our other daughters, on our CDs. 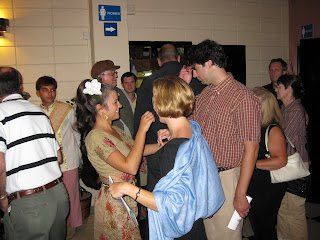 Our son and daughter inlaw, Jake and Liz had also come down to see Talia’s performance, so it was a nice little reunion at the end of our trip. We had stayed the night before at the trail of tears state park and had a wonderful evening walk along the Mississippi river. But late Saturday night we headed home after more than two weeks. We attended a wonderful Sunday morning mass at Our Savior Church in Mobile. We met Father David Tokarz whose engaging yet challenging style was so fitting for the eucharistic readings of the day.
We arrived home on Sunday evening and thanked God for our trip and all of you!
Posted by JerryandCricketAull.com at 10:48 AM No comments: