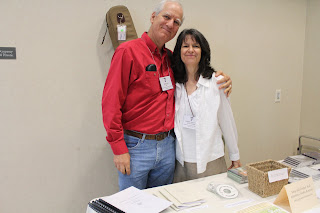 The summer included some travel, but a lot of family time and writing time for Cricket. jerry spent some time in the studio recording some new songs as well as our daughters, all of whom were here in Atlanta for August! Jerry continued teaching for the Diaconate program and spending time with his mother in nursing care up in Indy. The above photo was taken at the ARG in early August---always a wonderful time of renewal, learning, and communion in NC. A high point for Jerry was singing, with much chorus from the 300 or so fellow travellers, another song he wrote about getting lost at that retreat center between the buildings, cafe, and rooms, to the tune of amazing grace (I once was found, but now am lost....)---but also singing "I will gaze" to the San Damiano Cross at the close. 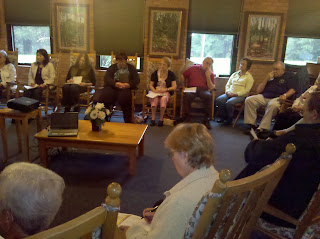 This picture was taken at a wonderful retreat center called Avila in NC. It is run by 2 wonderful nuns, Sr. Cam and Sr. Damian, and we hosted about 20 secular franciscans and inquirers in a 3 day retreat entitled, " A Journey through the Four Allegories and Rebuilding Ourselves Before We Rebuild the Church." This had been requested from a shorter presentation Cricket had made at ARG in 2010. 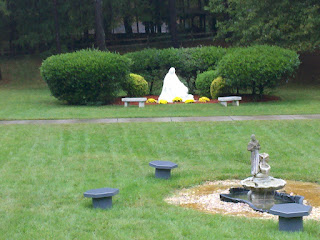 This was the first place where Cricket began selling her most recent book, "Releasing our trials to God", and we are working on an audio version of her teaching with music included. This picture to the right is taken just outside the conference room in the courtyard, but the grounds extend wonderfully.  There are stations and benches and gazebos, even a labyrinth for spiritual reflection. Many of the visitors had been here previously and found this a wonderful place for an annual retreat.

You +1'd this publicly. Undo
Sister Damian Marie, OFS, who revitalized this center in the 80's and still administrates it today, cleaned up a tiny cemetery where a Carmelite nun had been buried. This cemetary now also holds several children whose lack of funds had meant a non descript marker or place. Jerry sat praying for hours over this beautiful testament to the eternal life promise of our faith.
In early October, we were blessed to lead a morning and evening of reflection on the impact of the Year of Faith at our parish, Holy Trinity. It was well attended, though I regret I got so caught up in Cricket's teaching that I forgot to take pictures of the attendees! This teaching was so well received, primarily based on the Pope's Porta Fidei letter, that she was immediately asked to re-present it to 3 different prayer groups and bible studies. We intend to work on an audio program of this with music as well, and Jerry did provide music for these occasions. 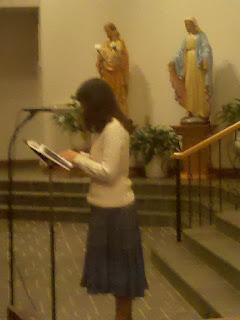 Later in October,  we again got to visit with the newly established Conyers secular Franciscans in a retreat Cricket wrote on Discerning your spiritual gifts and ministering with them. This is held at the beautiful Hoste catholic prayer community near the Trappist Monastery of the Holy Spirit in Conyers GA.

Posted by Jerry Aull at 1:58 PM No comments: